THE LOCK BEHIND THE SYSTEM 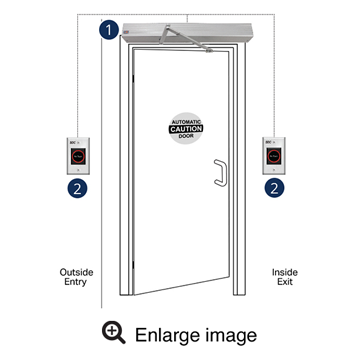 After 50 years of SDC, we are not sitting on our laurels. We are looking to the next 50 years as an opportunity to apply our ingenuity, skill and knowledge in access and egress door control technology to craft solutions with intense enthusiasm and energy. We will always endeavor to teach new generations of hardware and security innovators to unfailingly behave in the high-grade manner for which we are known.

HOW IT ALL BEGAN

Our founder, Arthur V. Geringer, was born in 1923 and grew up in his father’s architectural hardware business in Chicago. After serving in the US Army during

World War II, he returned to civilian life in 1945. He settled in California and was employed at a major Los Angeles contract hardware firm before moving to an automatic door firm. While there Art received his certification as an Architectural Hardware Consultant in 1952, allowing him to combine his industry experience with his energy and passion for innovation for the next 60 years. 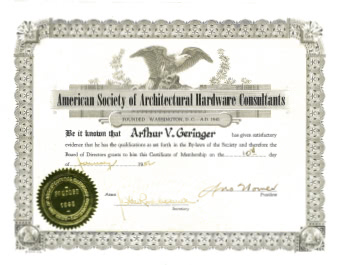 In 1971, Art was asked by the California State Fire Marshal to create a failsafe bolt lock for perimeter doors that would unlock automatically when the power was removed. His first solution was rejected because it relied upon springs to unlock – deemed unacceptable by the fire marshal. 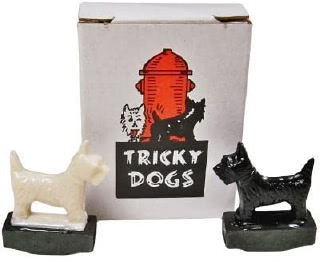 Undaunted, Art remembered little magnetized toy dogs that would repel each other when one dog smelled the other dog’s tail and realized a solution was there. He invents the FS23 series electric bolt lock which utilizes two repelling magnets to repel the bolt from the strike even if the spring should fail. The fire marshal approved it on the spot.

In 1972. Art patented the lock and approached his employer to manufacture it. He didn’t share Art’s intensity and enthusiasm for developing electric locking capabilities. The next day, Art resigned and with his wife, Mae, founded Security Door Controls in Tarzana, California - located in the San Fernando Valley area of Los Angeles County.

The great migration to electric locking systems had begun.

Art’s design for a lock that relied on magnets rather than mechanical springs, and his subsequent development of a 90° throw electric lock were foundational innovations that opened the potential of electric locking capabilities for security and fire life safety compliance throughout the world. During the 1970’s, his was one of only two locks in the country approved for locking commercial stairwell and perimeter doors. As the inventor of numerous electronic lock designs, Art is recognized for ushering in the modern era of access control hardware.

Today
SDC is credited with innovating a number of additional industry firsts including, but not limited to these selected highlights: 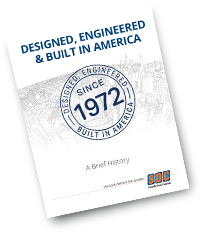 Although no one can predict exactly what the future holds, one can use experience, purpose and values to control how to respond to it. Because SDC has a tradition of excellence and innovation through several generations of family ownership and operation, we will continue to pursue efforts in refining our efficiencies and expanding our competence to best serve the market. In terms of fire and life safety, access and egress door control systems, SDC has always been and will continue to be “the lock behind the system.”